The Russian brand of smartphones and accessories, Caviar studied a test sample of Samsung Fold and being inspired by its shape reminding a book, created a precious design dedicated to the most expected book of the modern time – “The Winds of Winter”, a missing part of the novels cycle by George Martin, which lies in the base of the “Game of Thrones” series.

The release of the flexible smartphone by Samsung is a real sensation in the world of technologies; these are the possibilities that went beyond the framework of our ideas about the reality! It is interesting that the same can be said about the novels cycle “A song of Ice and Flame”, which is begun but yet not finished by George Martin. Its fascinating, amazing fantastic world of seven kingdoms has exceeded all our expectations and brought the modern literature to a new level. 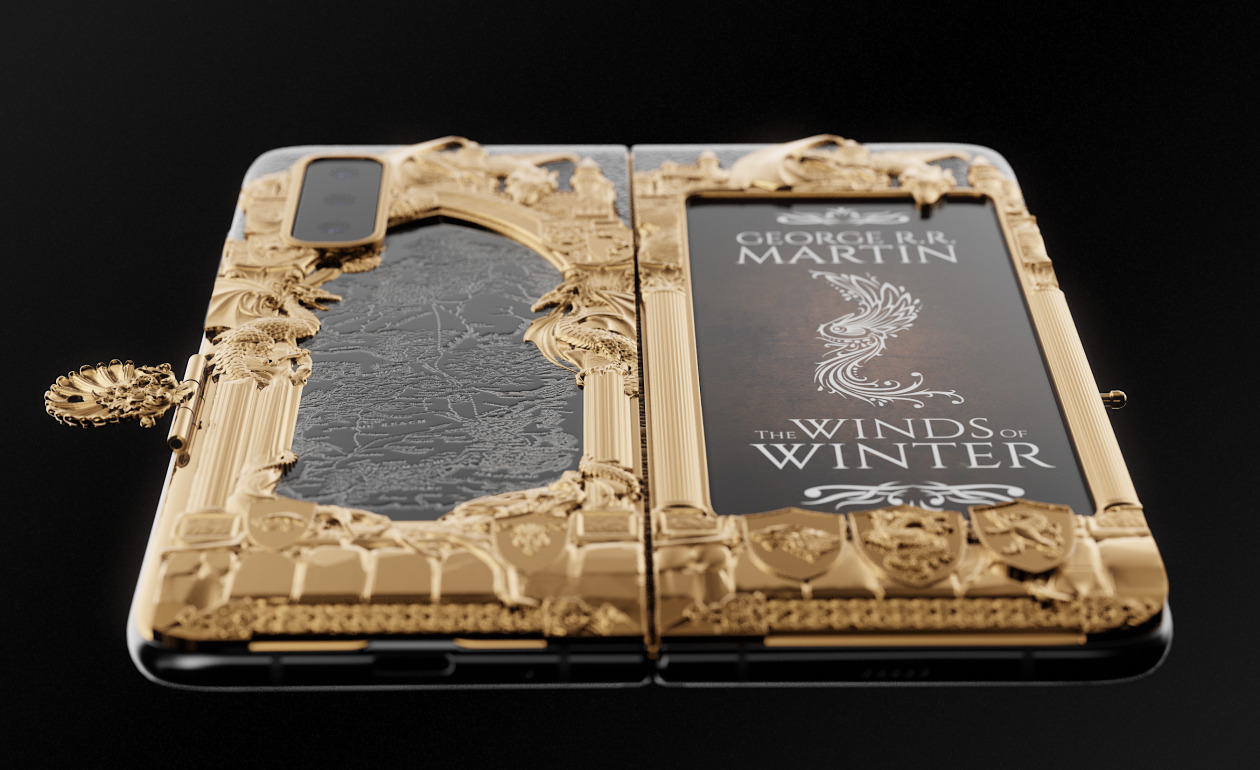 Being inspired by the synergy of art and technologies, Caviar embodied the client's ideas in the design of an absolutely extraordinary thing – a fold-out book smartphone decorated with volumetric images that can be easily recognized by everyone who are familiar with the series “Game of Thrones” or the series of Martin’s work. The copy was created according to the ideas of one of Caviar clients and with permission was presented to the public. 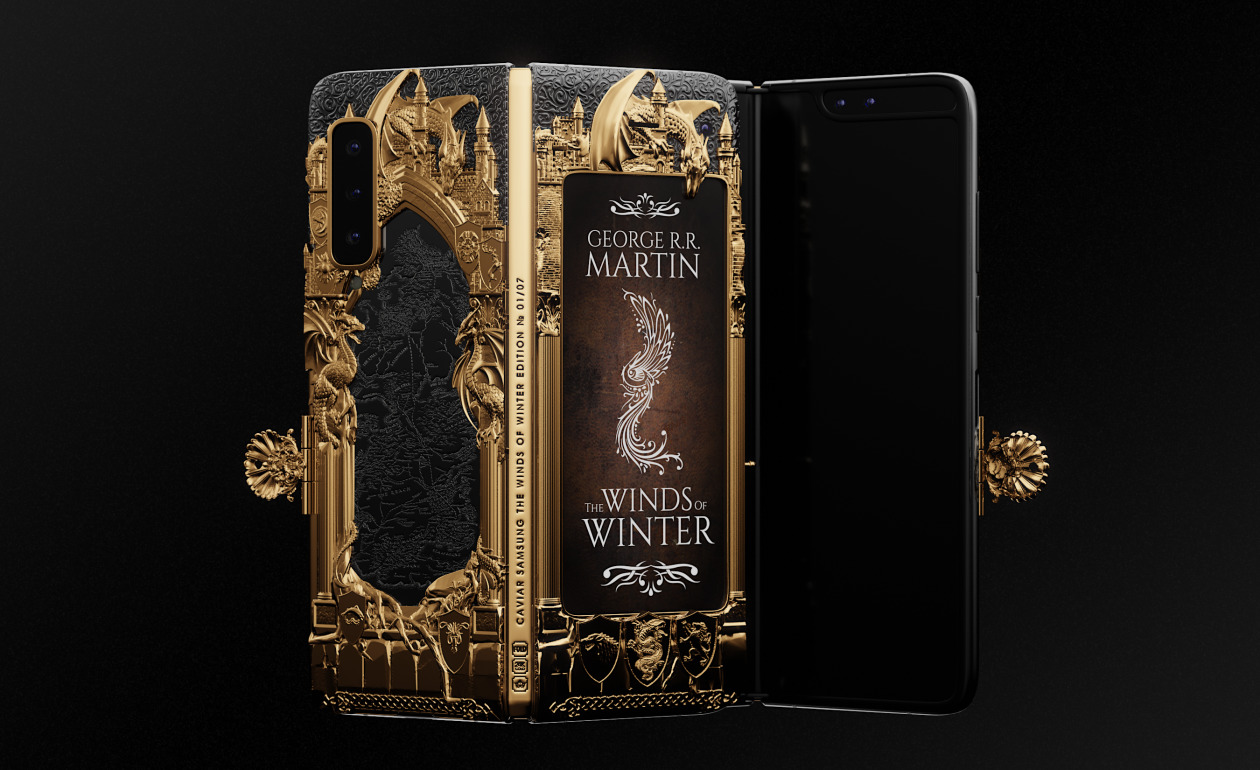 The form factor of Samsung Fold itself bears logical associations with an opening book, which is why by intensifying this idea, Caviar designers turned Samsung Fold into a precious volume of “The Winds of Winter” and even provided it with a golden clasp like on an old folio.

The volumetric design on the front and back side of the “flexible” smartphone contains heraldic images of the great houses from the Seven Kingdoms as well as the figures of scaring dragons and palace towers. On the panel of black composite only there is an engraved map of Westeros. The screen on the front side is literally embraced by a golden bas-relief, while the thematic “wallpaper” is decorated with the book title expected by the entire world. 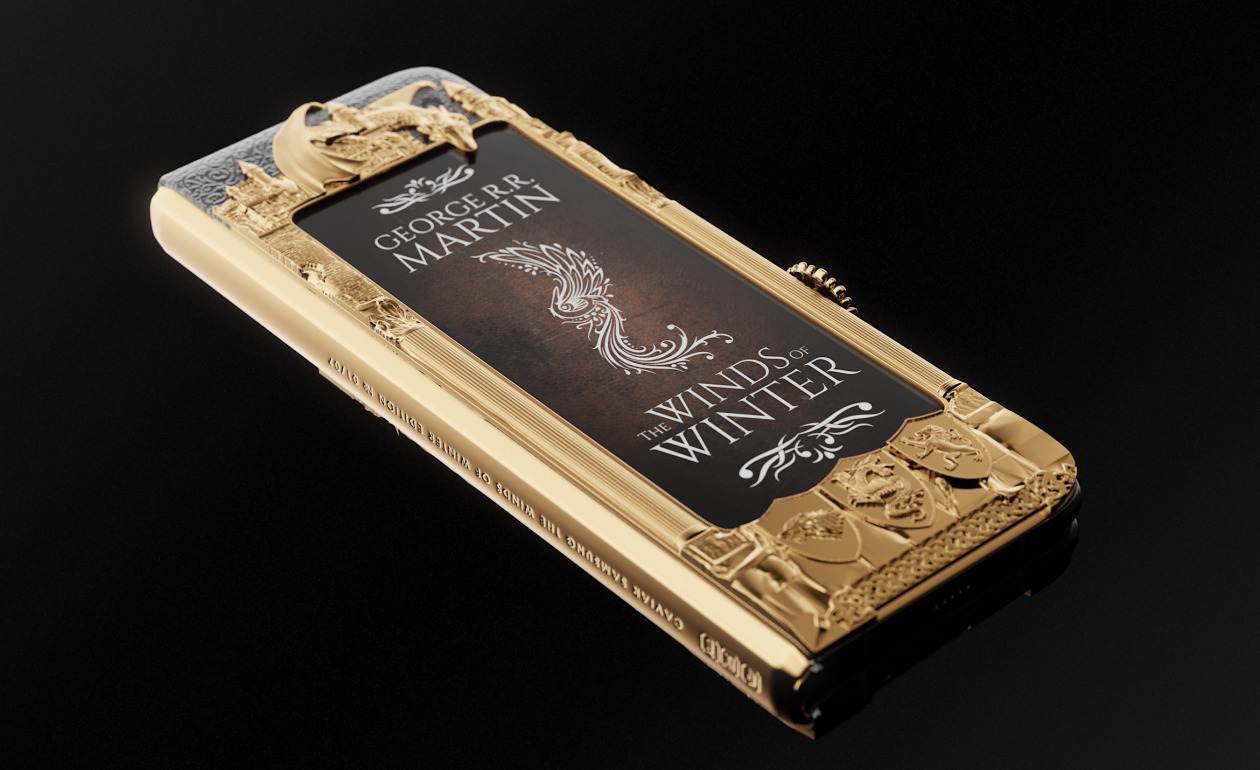 By the way, Caviar made a decision to send the first copy to George Martin himself to inspire him for a faster continuation of work on the cycle “A song of Ice and Flame” and say Thank you to him for the priceless masterpiece created by his imagination.

The unique smartphone is presented in a limited series of 7 copies according to the number of Westeros kingdoms. Its price is 499 000 RUB.

For those, who are interested in Samsung Fold but indifferent to the “Game of Thrones” and its literary primary source, Caviar presented 2 classic designs of carbon and leather. Their price starts from 349 000 RUB.

The novelties are available for a pre-order; the start of sales will begin with the opening of official Samsung Fold sales.