Caviar have set a course to the Sun. New Solarius made of gold and diamonds

In the new Solarius Collection, the Russian luxury brand Caviar introduced a new design of iPhone 11 Pro in the body of 750-content gold and tourbillon watches with the pieces of celestial bodies.

The flagship of the new collection became the model issued in one copy, to create which 750-content gold and 137 diamonds are needed. The model turned out to be extremely weighty, but this provides a special value to it as a bar of gold actually lies in one’s hands. 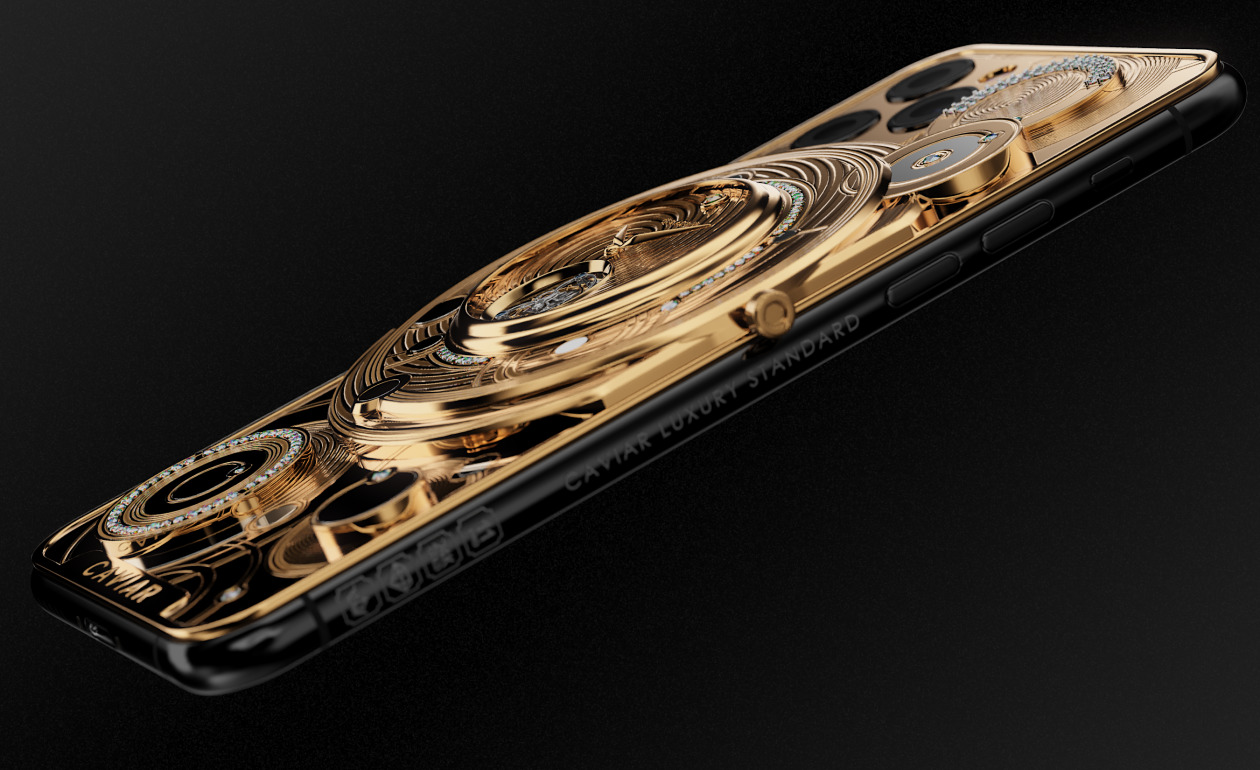 The name Solarius plainly makes it clear that Caviar designers found their inspiration in the main celestial body. The concentric circles of gold and diamonds, constantly moving tourbillon watch built in into the smartphone’s body symbolize the eternal life that Sun gives to our planet. Into the watch face that is inserted in the iPhone’s body, a precious yellow diamond is encrusted, which is also called “a sun stone”.

The collection also presents exclusive limited models of iPhone 11 Pro and tourbillon watches with the built-in pieces of the celestial bodies: Mars (19 copies), the Moon (19 copies) and the Tsarev Meteorite (99 copies). In the design of each mode, the mood of the planets can also be read: blackened titanium and red stone for the warlike Mars, carbon and cream stone for the mysterious Moon, gold and blue stone for the prosperous Earth. The laconic appearance of the watches is complemented by the eccentric design of the smartphones: together, they create a luxurious couple of exclusive accessories.

Origin of the materials

The pieces of the meteorite, Mars and the Moon used in the Caviar novelties, were mined at the places where meteorites of cosmic and planetary origin have fallen. In particular, the pieces of Mars and the Moon were mined from the rests of the meteorites that had formed on these planets and fallen to the Earth. All the fragments of alien bodies are certified by the Expert Gemological and Mineralogical Consultation of the f the Mineralogical Museum of the Russian Academy of Sciences.

“The mysteries of the far space excite the imagination. How much enigmatic and undiscovered do the far planets keep? The humanity is steadily moving towards the colonization of the Solar system: the space walks became a common thing, and Mars is going to become our first colonized planet soon. For everyone who want to involved in the heroic space exploration, want to embrace the romance of the interplanetary travel and solve puzzles of the vast Universe, we created the extraordinary Discovery Solarius collection. Now, everybody has a possibility to become an owner of unbelievable wealth of the Solar System”, the representatives of Caviar comment.